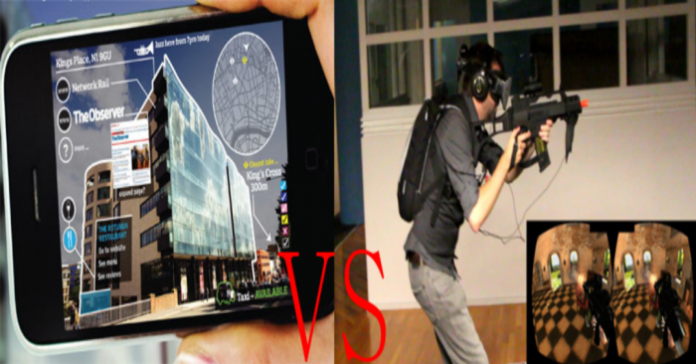 As the world moves towards enabling persons to be more digital, a question arose in my mind that I haven’t heard asked. Should we be moving towards Augmented Reality or Virtual Reality?

Augmented Reality is a method which brings digital aspects into the real world by viewing the world through lens (smartphone, glasses, etc.) a good example was Google’s PokeMon April Fool’s day gag. Virtual Reality is a method which emurses the user into a virtual space where they imagine their body moving or actually move their body to move the virtual character, if you’ve ever heard of .Hack// or Sword Art Online (both anime/animated cartoons from Japan) then you’ll get a good idea.

The first question is, why seperate the two? My answer is because both require a lot more work to become viable in today’s world.

AR (Augmented Reality) will require devices with larger batteries to both feed what they see in the real world, process it online, and then feed it back to you. Google Glass is probably the most pronounced version of this happening but even that has its limits until it really goes public (aka the price drops and the final design/specs are decided on). Admittedly, Google Glass isn’t for everyone just yet, and even at work I get asked why I’m not wearing my “geek glasses” if I choose to wear normal ones. Google Glass can’t handle long hours of usage though, and can die within about 30 minutes of just recording video (if not even earlier), so it’s just not as viable. I want worlds where I can boot up an app and walk around in the real world and see things moving around me, real world objects being attacked or attacking people in the app. The closest is Google’s Ingress game, which is a worldwide game that hosts several hundred thousand players … but that’s just one app. Google stirred up something within me when they did their gag, and I want that to become reality. Can you imagine a rare item or pet that is only at a few locations worldwide and the trading that would be required? This could literally have its own ecosystem that also ties in real world funds.
Then there’s VR (Virtual Reality), best personified by today’s Occulus Rift, a headset which you wear but places you in a game or world where you’re free to move about. If you follow the direction Japan seems to have us moving, that same technology will eventually lead us into mass multi player virtual worlds or just immersive versions or MMORPGs. Imagine when you place on this headset, rest in a chair or laying down on your bed, and being taken into a world where you can do the same things you do in games, from a first person experience. Even just chatting with people would be different, and for that I’d suggest taking a peek into how the chat virtual reality space would work by watching the first two episodes of Accel World.Both of these require a lot of time to be developed, and if one can be made before the other, so be it so long as they are done. AR seems to be the answer in the short run, but we’re still limited by either GPS or printed markers which the camera picks up on and recognises as say a character in a game that you’re about to play. Removing the limitation and say having something pop out from a bush that you’re about to pass will take more time to process. Of course, on the consumer side the only thing that needs to be improved on is the battery.

VR in turn is still being developed on a whole, but has more resources behind it since Oculus is now owned by Facebook. It does have about the same level of usage, but you’ll probably find more gamers leaning towards VR and more of the average Joe or light gamers going AR.

Previous articleWhy has the mobile innovation stopped?
Next articleThe Note Edge: The gateway device to the future

So I've had Google Glass for almost a month...
Read more
Tech

At least that I know of. (It's already up...
Read more