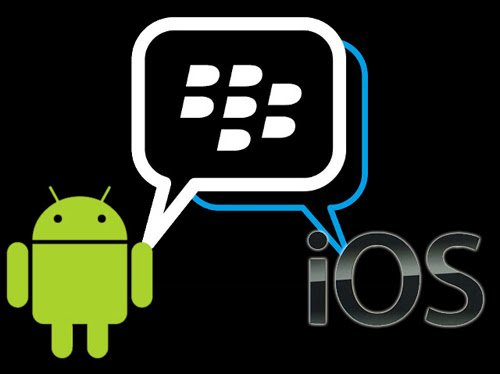 BBM for Android and iOS has soared in downloads, even becoming the top free app in more than 75 countries in the first 24 hours on the iOS App Store. Mind you now, the 10 million are actually combining both iOS downloads and Android downloads.

In just 24 hours BBM™ has been downloaded over 10 million times by Android™ and iPhone® users, one of the best single-day openings for a mobile app to date. BBM, the premier private social network from BlackBerry® (NASDAQ: BBRY; TSX: BB), is available for free in the App StoreSM and Google Play™ for immediate download.

BBM also quickly rose through the rankings on the App Store to be the number one free app in more than 75 countries in the first 24 hours, including the US, Canada, the UK, Indonesia and most of the Middle East. User ratings in both the App Store and Google Play are overwhelmingly positive, earning BBM 60,000 five-star reviews on Google Play from about 87,000 reviews.

Unfortunately, because of BBM’s newfound success, people are thinking that something is fishy. There’s talk that some of the comments are very similar (makes sense since they’re talking about the same thing).

Then there’s the persons asking, “BBM? What’s that? Why should we bother?”

BBM users, old and new, are enjoying the following features:

BBM Chat – Enjoy real, immediate conversations with friends on Android, iPhone and BlackBerry smartphones. Not only does BBM let people know their message has been delivered and read, it also shows them when a contact is responding to a message.

More than chat – With BBM, customers can simply and instantly share files such as photos and voice notes. Multi-person chats are a great way to invite contacts to chat together.

Get in the Group – BBM Groups lets users invite up to 30 friends to chat together, as well as share photo albums, calendars and files.

Your unique PIN – Every BBM user has a unique PIN that maintains privacy, so users are not required to ever give out their phone number or email address to a new or casual contact.

Android and iPhone users will have access to BBM Voice and Video calling, as well as the new community building tool – BBM Channels – in the near future.

Got that? So you’ve got a slew of BBM standard things, but also you get Voice and Video which is nice AND BBM Channels which I perssonally think is awesome in itself.

But what about those numbers?

The numbers add up, in all truth. There are still millions of people who use BlackBerries today across the world. Remember, just because the USA’s percentile dropped, doesn’t mean it’s true world wide. Africa, South America, the Caribbean, parts of Europe and Asia … all still have a fairly high BlackBerry percentile.

Even without talking handsets, it’s a leader in the amount of messages the app sends PER DAY.

About BBM
BBM has more than 60 million monthly active customers, with more than 51 million people using BBM an average of 90 minutes per day. BBM customers collectively send and receive more than 10 billion messages each day, nearly twice as many messages per user per day as compared to other mobile messaging apps. Almost half of BBM messages are read within 20 seconds of being received; indicating how truly engaged BBM customers are.

Why you should move from BBM and WhatsApp to ChatON

Let's face it, in the coming months you'll be...
Read more